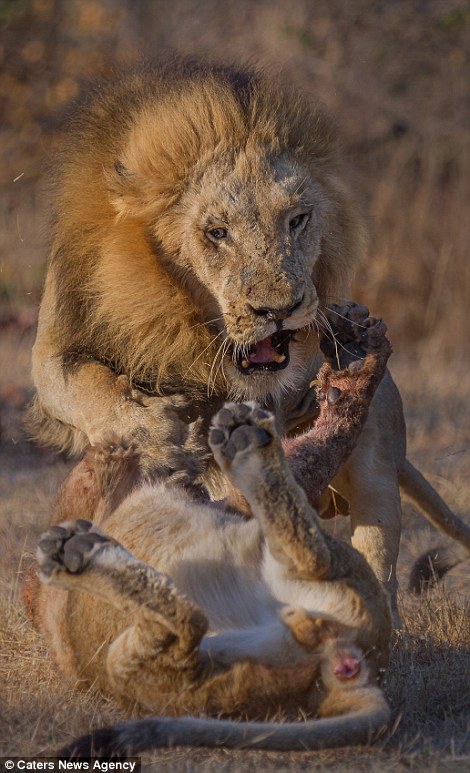 With a long lens camera! Photographer captures incredible images of lions fighting over their food in South Africa

Hungry lionesses and cubs stood proud of the dinner they had hunted Singita Game Reserve located, South Africa
But soon the pride’s dominant male moved in at the reserve on the western border of the Kruger National Park

A fight follows over the kill, captured brilliantly by South African photographer and tour group leader Chris Renshaw
Respect shown by Renshaw for his subject contrasts utterly with Dr Walter Palmer’s killing of Cecil in Zimbabw

A pride of lions brawl over the spoils of a hunt in these incredible images.

The hungry lionesses and their cubs stood proud of the dinner they had hunted but their joy was short-lived,

as the rest of the group came over to inspect what they had killed at the Singita Game Reserve located on the western border of the Kruger National Park in South Africa.

A ravenous lion was caught at full gallop looking straight into the camera as he ran over to grab himself some dinner. 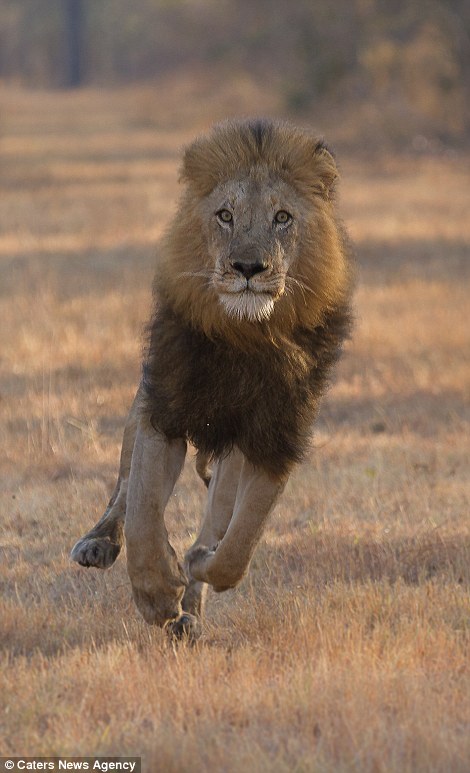 Eyes on the prize: The dominant male of the pride gallops towards the kill to secure his share (left), and puts a young cub in his place (right) 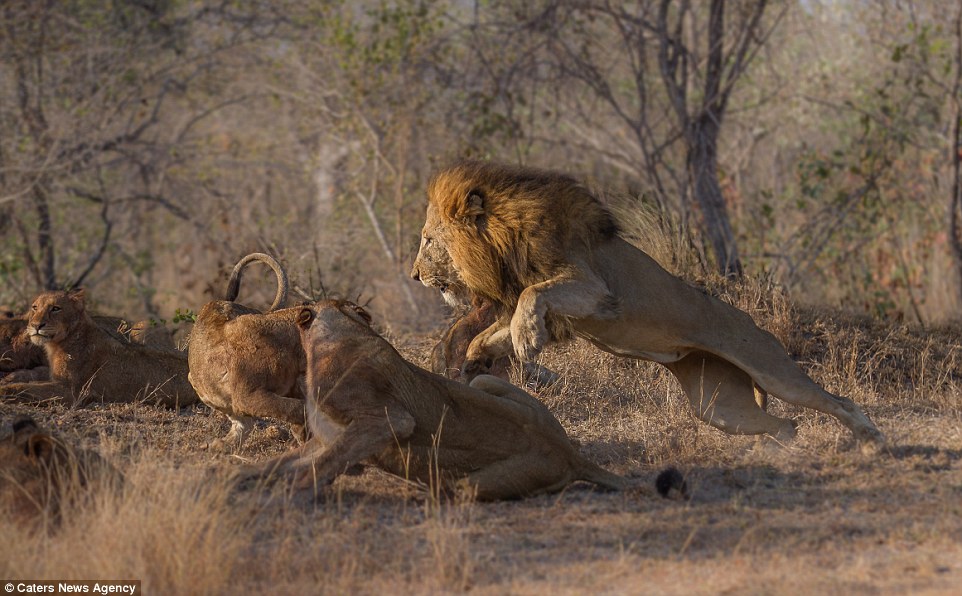 I’m the boss: The male leaps at one of the cubs of the pride as another sibling looks on warily at the Singita Game Reserve in South Africa 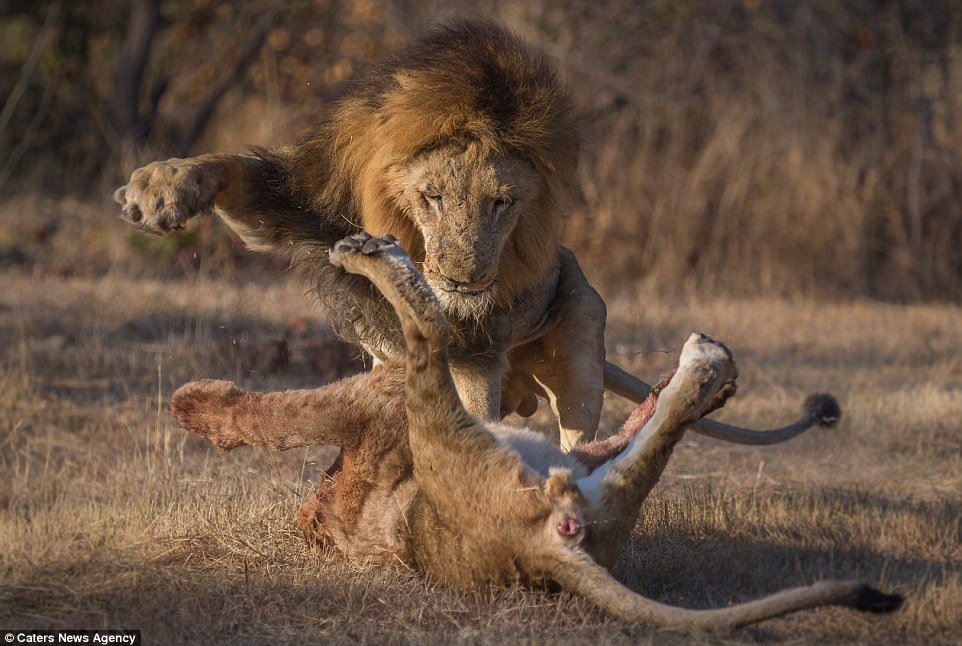 Smackdown: A cub is taught a lesson by the dominant male, keen to secure his share of the kill at the reserve on the western border of the Kruger National Park 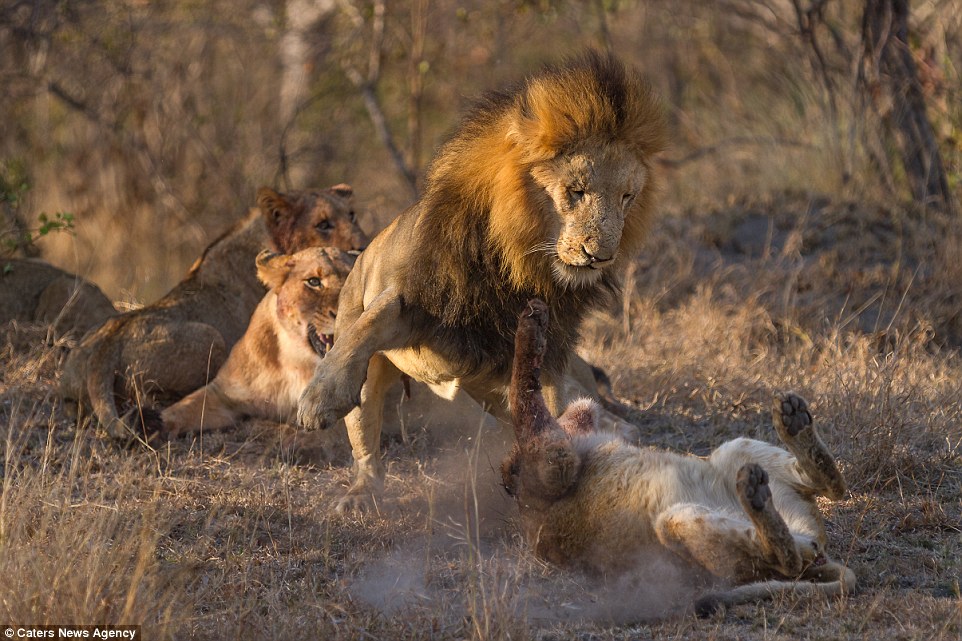 Brawling: South African photographer Chris Renshaw caught the whole incredible event on film as the lions fought over the spoils of a hunt 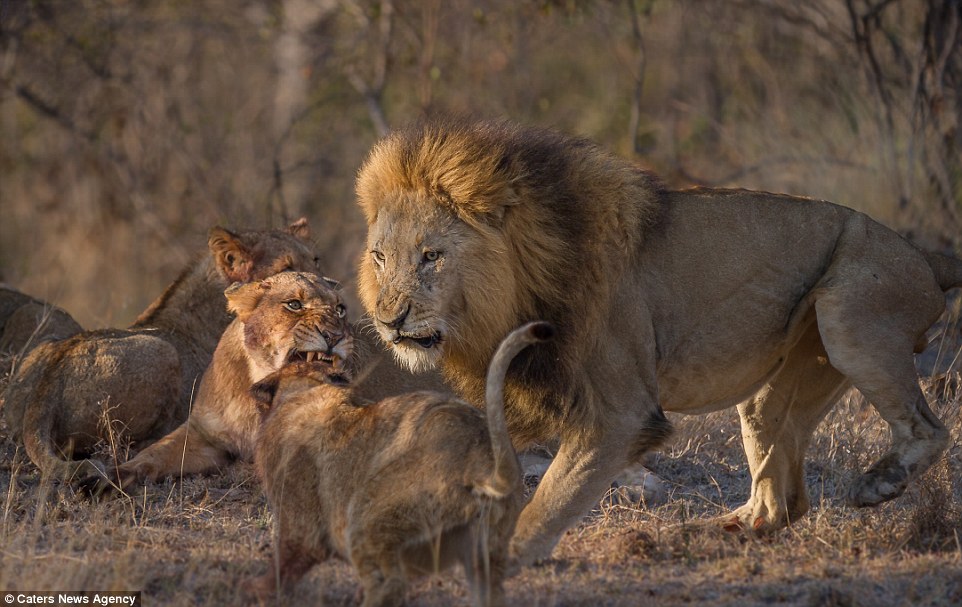 Hostile: The dominant male snarls during the standoff, all while preparing to spring and asserting his dominance over the pride

Soon a fight had broken out, with the dominant male, lionesses and young cubs snarling at one another and baring their teeth as they fought over who could eat what.

South African photographer Chris Renshaw caught the whole incredible event on film. The safari operator took the photos while leading a tour of the reserve.

He said: ‘It took a while for all of us to calm down and digest what we had just witnessed.

‘They went from sleeping beauties to rage-filled warriors and it is why I love lions, they epitomise everything that is the African bush.

They have peaceful beauty, wonder and splendour that in an instant can become brutally intense with awe inspiring power.’
In one amazing shot the dominant male, marked out by his flowing mane, puts one of the young cubs in his place with a few well-placed blows from his mighty paws and biting jaws.

In complete submission, the cub rolls on his back and accepts his punishment.

The respect shown by Renshaw for his subject contrasts utterly with a shocking photo of Dr Walter Palmer posing with a dead lion he has killed.
The image emerged in the wake of the Minnesota dentist’s slaughter of Cecil, a famous and protected lion in Zimbabwe, which has appalled the world. 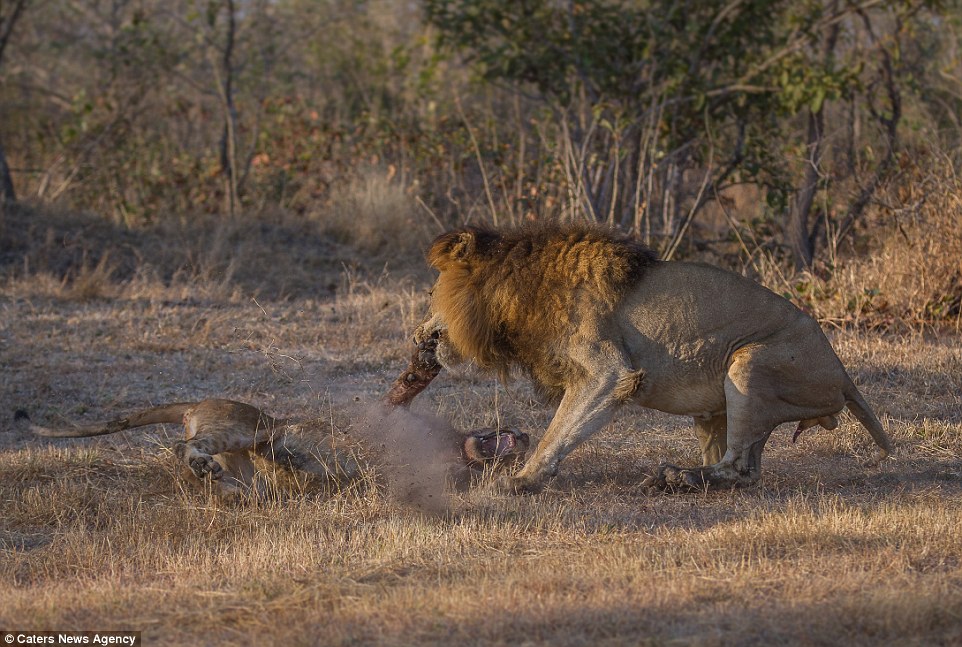 Teaching a lesson: Tour group leader Mr Renshaw said: ‘It took a while for all of us to calm down and digest what we had just witnessed’ 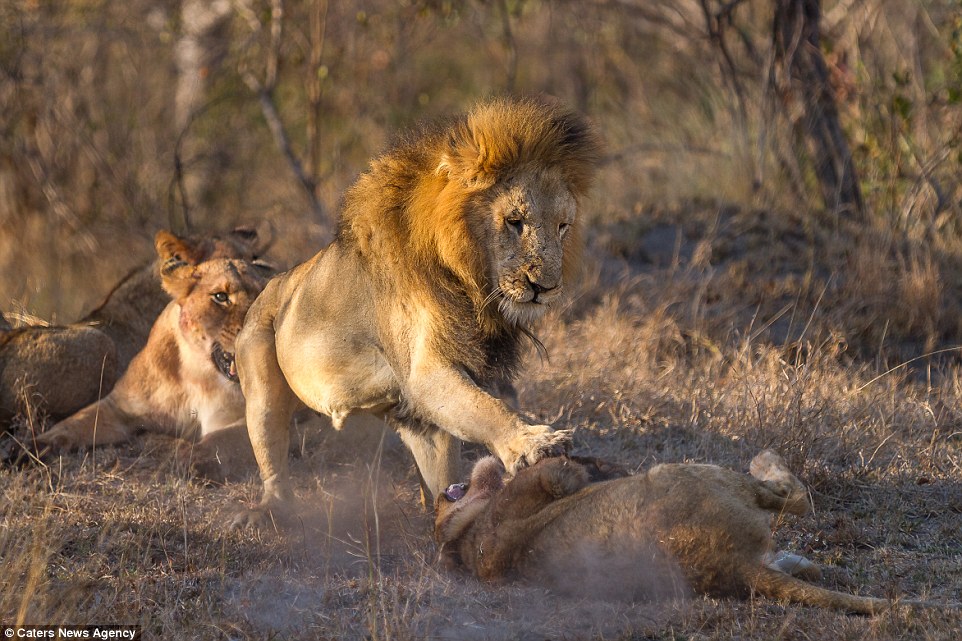 Stay down: The dominant male lays one of his mighty paws on a young cub, who can only roll over and take his punishment 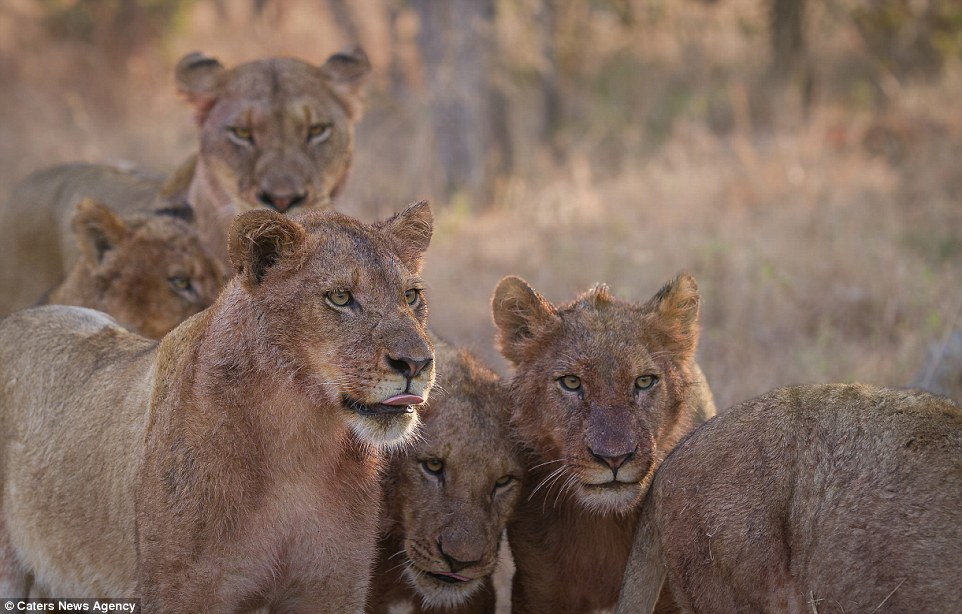 Ravenous: The cubs and lionesses are clearly hungry for the kill – but they have to reckon with the dominant male taking his share before they can eat

Shocking: Walter Palmer (left), an avid big game hunter who has killed dozens of animals, including this lion, has admitted to being the one who shot and killed Cecil the Lion (not pictured) in Zimbabwe 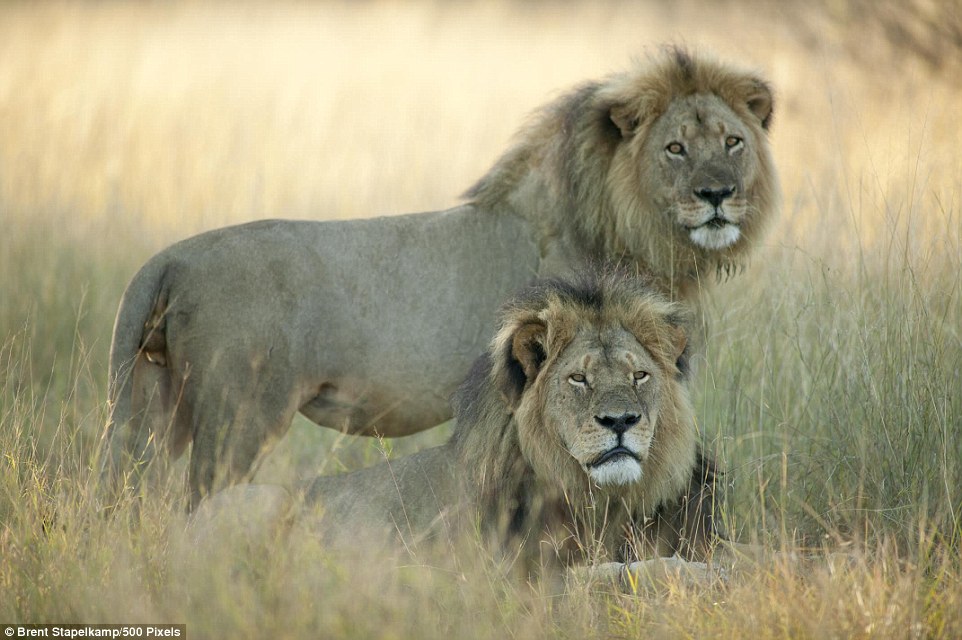 Desperately sad: This is the last known photograph of Cecil the lion (bottom) taken before he was killed by the American dentist Palmer