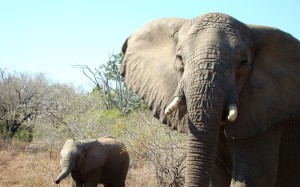 An African Safari can not be complete without seeing a African Elephant, both Hluhluwe and Umfolozi Game Reserve have breeding herds and sightings quite often spectacular.

Within this order which comprises of one family of which 2 Elephant species are found in the World one in Asia and another in Africa. With a nose as long as its legs that functions as a siphon, trumpet and a feeding tool that can with finger like tip rip branches from a tree, or ripping grass to picking up a pea.

Elephants are mix feeders and therefore will feed on grass as well as browsing on most types of trees. They can reach up to heights of 6 m with their trunks. The body can overheat therefore shade and watering holes and needed to cool down. The large ears also dissipate heat from their veins lying just under the skin. The tusks which occur in both sexes are merely modified upper incisors that never stop growing.

Elephants are led by a matriarch ( Grandmother ).
Most mating and births will occur in the rainy season; 1 calf born after a gestation of 22 months the longest in mammals. Most Elephants will consist of a herd of 9 to 11 Females and their calves and this forms the basic social unit.

Male will leave the herd once they reach puberty ( 12 yrs ) they will then spend the rest of their lives associating with other Males and wandering alone. Polygynous at around 25 yrs and start competing reproductive. The Elephant eyes which are very small can however see very far further than a few hundred feet. Elephants are excellent swimmers.

The Hluhluwe Umfolozi Game Reserve previously was regarded as two separate parks this today is one park with a corridor road in-between the two. In Winter months the Elephants are predominantly found in the Hluhluwe Reserve and as Summer approaches they will migrate down South towards the Umfolozi Reserve.

Large breeding herds are sighted regularly on the banks of the Black Umfolozi River as well as watering holes. Both the Hluhluwe and the Umfolozi offers visitors vantage points of the watering holes. Ezemvelo Kzn Wildlife have developed numerous hides in both sides of the park and they remain a good source of viewing. The Umfolozi section in Summer hot spots are the areas of the Black Umfolozi River, Sontuli Loop and Mphafa hide.

Coming across a African Elephant can be terrifying however if not provoked or cornered will leave you alone. It is imperative that you remain quite and do not shuffle around in the vehicle. Take note if the Elephant is in Musk as this mostly is when a Elephant is aggressive however once again remain calm and keep your distance.

On numerous occasions it has happened in National Parks in South Africa that these animals get cornered or can not continue on their way as vehicles are stopping them from continuing. This will create a problem not only for you, but as well as all the other vehicles. Always try to stop behind the there cars and on the same side should they or you need to move the scene.