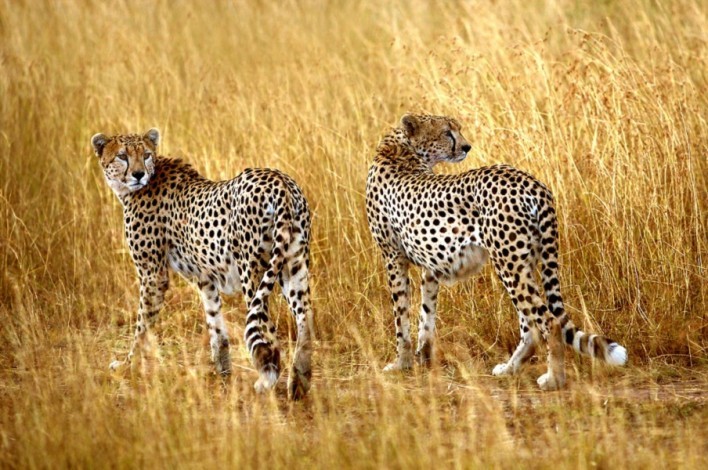 A silhouette perched silently, the breathless movement only a slight swagger of a tail, ssshh I asked my clients. Don’t move, don’t talk with some patience I’m sure we will get closer. We immediately ceased all communication and movement, a rustle in the distance may be the mother returning with a kill. Excitement & heart pounding at the thought of having my clients witness something even more. No, it’s a Giraffe moving through the thicket towards a watering hole some hundred meters away. 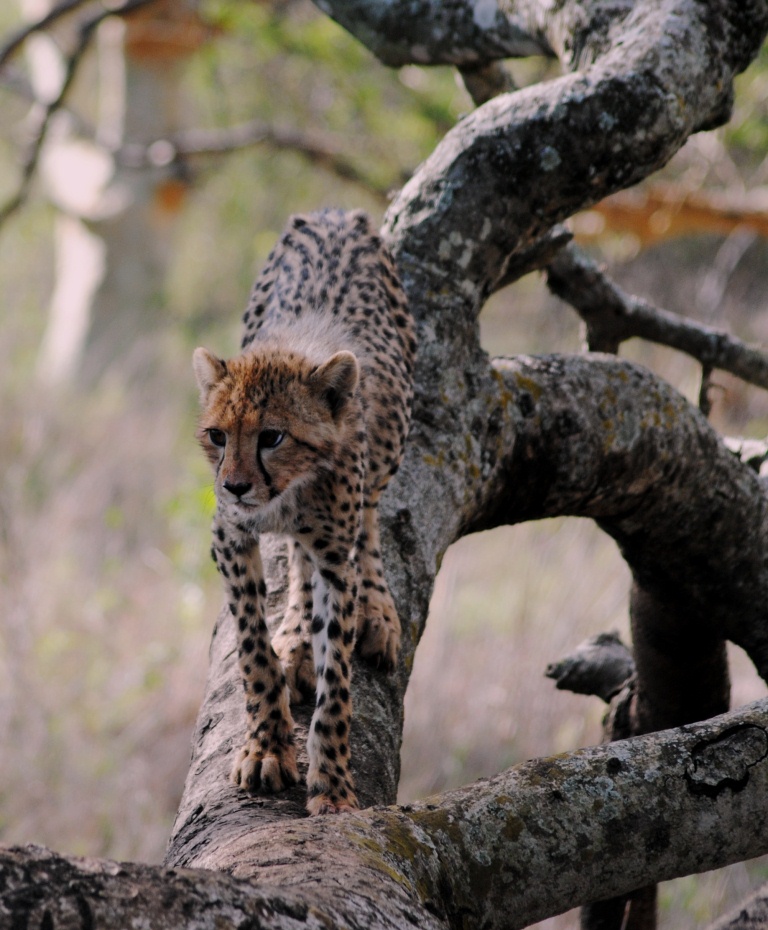 By now the youngsters deep in play and a bit more relaxed by the intimidating intrusion of their morning play continue with child splay. Now let’s try and get a bit closer they seem more relaxed I switch on the game drive and slowly edge closer ant hills surely move and grow quicker. 8 Meters away okay let’s sit tight and see their reaction, a few minutes go by. It would now seem they are more interested tangled legs, tails topple over one another. Clients are given the go take some pictures I’m not too sure how long they will stay.

By now we are talking within earshot of the Cheetah’s unhindered and undeterred. Joyful minutes fly by cameras packed away and clients just sitting in amazement. The crackling and rustling sounds of leaves and branches as the two youngsters continue with their morning play.

Then a stir, the two youngster’s pause listen intently cower down. The sound soft but growing from the East, they sniff and now that playtime is all over.

A gentle grunt, and purr and the youngsters obey the commands of their mother; this sighting dissolves once again into a silhouette. Jubilant and ecstatic clients we move on to more magnificent sightings.

While on a Night Safari the previous night I had noticed a bit of movement in a particular area, managing only to see a tail I was convinced that it was a Leopard. We continued to scout the area to no avail, sorry folks we’ll have to head on home, fortunately, we had spotted Hippo’s grazing with short legs carrying such a weight. Giraffes trying to catch a nap and a small herd of Buffalo. An unusually quiet Night Drive. My clients were tired and they all decided to call it a night. Let’s try early morning and see if we can track the Leopard.

Early the next morning I met my clients with piping hot cups of Coffee in their hands we discussed where exactly we would travel too. This their last day in the iSimangaliso Wetland Park I knew that the only animal left to see was the elusive Leopard that evaded them so far. Next stop was Heathrow they continued chuckling at the thought of freezing temperatures.

Boarding the game drive we left in a hurry, let’s make use of the sunrise folks as the Leopard may just still be stalking for an easy treat. We entered the Western Shores of iSimangaliso Wetland Park our concession area. After years of being in the bush, no one Sunrise can match the other, the tranquillity and scurry of smaller animals to the denser bush. We wasted no time in introductions to the reserve but moved hurriedly to that one particular area. White Rhino crossing our path, Giraffe’s looking as though they hadn’t had a great nights nap slow movements all around. African Fish Eagles calling a sound that one never forgets. So what of that Leopard sighting I here from the back, what do you think the chances are?

As Leopards are loners and like to pray at night mostly the chances are slim, however, we are early and just maybe he may have a kill, then he will stay in the area. With only 2 kilometers to go, we witness Hippo’s returning to the Estuary one of the largest in Africa and home to more than 800. Not a place to swim.

At last, we reach the area where I had seen a tail of a leopard the previous night. We slow down and I ask everyone to be as quiet as possible any loud noises will startle the Leopard if he’s here. We continue for another 30 minutes or so when my of clients asks for another cupper. Another quick cup of hot Coffee or Tea, South African rusks and we are back in the game drive vehicle. We head into a slight breeze good fortune may just be on our side. Its then that I spotted the same tail, switching of the motor immediately I raise my hand in the direction of the tail. A slight movement just enough for everyone to see, luckily no words exchanged for directions.

My first sighting of a Leopard in the bush remains with me to this day one can only describe it as unreal. We sit quietly, no movement at all 10 mins, 20 mins it’s clear theirs a kill in the tree. I finally hope that with the start-up of the game drive that I won’t give cause to him moving. We edge closer, trying not to show any intimidation or aggression. I kill the motor and turn around to see that not one of my clients has yet remembered to take out their cameras. Such a captivating sighting. I finally manage to gesture to everyone in some odd sign language to take photographs.

Lenses changed and flash’s switched off, pictures were taken at a monumental pace. Our portrait is complete with the background of thick bush and the most impressive animal in Africa the Leopard.

We don’t stay too long just enough to last a lifetime.

For more go to https://www.stluciasouthafrica.com