“Last of the Big Tuskers” A Film By James Currie

THE STORY - In December of 2013 the biggest elephant in the world was seen for the last time in a remote corner of South Africa. His name in Zulu was Isilo, which means King of Kings. He was much-loved by many and even had his own Facebook page with over 16,000 fans! Conservationists and concerned community members searched for months on end for his body until, in late March of 2014, the carcass of the giant was found, his magnificent tusks GONE. Read More

JAMES CURRIE is a life-long wildlife enthusiast, TV host, published author and native of South Africa. His passion for elephants drives this film.

GREG NELSON is an extremely skilled wildlife cameraman and director and has much experience filming elephants. His creative eye drives this film.

TOM MAHAMBA lives in Tembe Elephant Park and is a main character in the film. His story-telling drives this film.

ROSS GOODE is an environmental maniac and lover of all things wild. His knowledge of the African bush drives this film.

JOHAN MARAIS is the world's authority on big tusker elephants. A well-respected large animal veterinarian, his experience drives this film.  "Last Of The Big Tuskers" 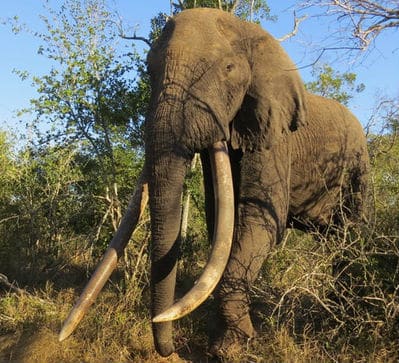 Last of the Big Tuskers Film

Please Help raise awareness about the Big Tuskers of Tembe Elephant Park through a new conservation film. On April 13, 2016, James Currie and his team of wildlife experts launched a Kickstarter campaign to complete the elephant documentary, “Last of the Big Tuskers”. The film covers the life and death of Isilo, one of the largest elephants in the world, and explores the future of the remaining big tusker elephants in Africa. Big tusker elephants are those elephants with tusks weighing more than one hundred pounds a side. Only forty of these majestic animals remain on earth today.

Tembe Park ranger Tom Mahamba, producer James Currie and big tusker expert Johan Marais plan to journey from South Africa to Kenya to document the world's last remaining big tuskers. They will chronicle the Tembe Elephant Park efforts to protect the Tembe big tusker gene and explore the feasibility of its introduction to other parts of Africa where the gene for big tusks has been eliminated. The team has already completed two filming trips. They are seeking funding to complete the final filming requirements and for post-production activities.

“With the rapid migration of elephant poaching southward, this research cannot come at a better time. Something needs to be done NOW to save the world's remaining giants,” says producer James Currie. “We are raising money on Kickstarter to raise awareness and also to build a community to support us on this amazing journey.”

In exchange for pledging to the project, backers can gain access to a variety of rewards including a digital download of the film, autographed copies of his acclaimed book When Eagles Roar for $75, signed DVDs, a personal screening of the film and even a 4-night stay at Tembe Elephant Park in South Africa. Proceeds from Last of the Big Tuskers will go to two elephant conservation organizations: Elephants Without Borders and the Tembe Tusker Foundation.
These elephants need a voice.

For more information, please visit the Kickstarter page here:
https://www.kickstarter.com/projects/tuskersmovie/last-of-the-big-tuskers
or contact the producer at james@birdingadventures.com

Many thanks for your support.

More On The African Big 5

Leopards are probably one of the most secretive and elusive animals in the animal kingdom,

high adaptability their master ability for stealth makes these animal a definite see!!

Rhinos are the second largest land mammals in the world,

surpassed only by the elephant in its bulk and weight.

Lion's can reach speeds of 81 km/h Female's do most of the hunting,

usually several females will hunt together working as a team.

Elephants have the Largest Teeth on Earth larger than Whales.

The loss of teeth contribute to or is the leading cause of death of mature Elephants.

As the final molar breaks it becomes ever difficult to chew food,

and this may cause starvation and malnutrition.

Buffalo's kill more hunters than any other specie

Cape Buffalo have 4 times the strength of an Ox